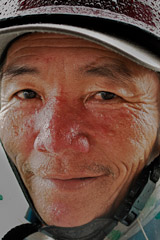 After leaving Hoi An I was heading south To Ho Chi Minh City. Given that the Vietnamese rail system is virtually non-existent, the best way to travel was via an internal flight from Da Nang. Once famous for being the home of a major air base used by the United States Air Force, at the height of the war it was one of the world's busiest airports with more air traffic operations daily than any airport in the world at that time.

These days it is the fifth largest city in Vietnam but doesn't feature highly on the itinerary for todays tourists and pack-packers. After arriving at the airport at 8am only to find all the seats sold, I had eight hours to kill before the next flight south at 4.15pm. By 9am I was sat sheltered from the rain, by the waterside looking out over the South China Sea, disappointed that I was virtually losing a day of my trip.

Binh was a Motorcycle Taxi Rider. At first his offer of a tour of the 'real Vietnam' for £7 wasn't that appealing; spending the day on the back of a motorbike, in the rain, visiting the few sites Da Nang seemed to offer, but with nothing else planned...

After a traditional Vietnamese Breakfast and a visit to the War Museum, Binh showed me around the local market, always a good way to see the real side of any town when travelling. Over a late lunch, passing the last couple of hours before my flight, Binh told me a little about his life. Born and raised in Da Nang he was a teenager when war broke out and like many Vietnamese who had no particular political affiliation, he had to make a decision as to which side he supported. As the cities were controlled by the Americans, and the countryside by the Viet Cong, living in the city he supported the Americans. He preferred it that way. As he said, "if you lived in the city you supported the USA and got a job and gum. If you lived in the countryside you supported the Viet Cong and got diseases and shot"! Binh's job was to help a US Army Dentist.

When the war was over Binh was persecuted for supporting the US and was sent to a 'Re-education Camp'. These were the prison camps operated by the government of Vietnam following the end of the War. Several hundred thousand people were incarcerated in the camps and it was seen as both a means of revenge and a repression. People were imprisoned with no formal charges or trials and over 150,000 people died; thousands were tortured or abused. Prisoners were incarcerated for as long as 17 years, with most terms ranging from three to 10 years. Binh was lucky and only served one year before being released but the persecution continued and Binh, and many others who supported the US, were denied education, jobs and basic human rights. Released prisoners were placed on probation and kept under surveillance and during that time they had no official status, no exit visas, no access to government food rations and no right to send their children to school.

A couple of years after the end of the war the American dentist returned to Da Nang and sought out Binh. When he found him, he gave him enough money to buy a cycle rickshaw and to the dignity to work. Binh was able to provide for his family and even able to educate his daughter. He used the rickshaw until it was virtually falling apart. The Dentist kept in touch with Binh and returned to Da Nang once again and gave him $500. Along with the his meagre savings Bing was able to buy a Honda motorcycle and start a taxi business. This was the same Honda that Binh was still using when I met him years later, although it was on its last legs and he struggled to get it going after each stop.

Binh also told me that he was exceptionally proud at the moment as his daughter had just become the first member of his family to be accepted into Da Nang University.

Binh also told me that his name meant 'Peace' in Vietnamese. It was humbling meeting him.